So this blog was supposed to be about how I decided I needed a bit more room inside my robot, how I switched to a large box, mounted the motors on it, added cabling so the motors can be easily swapped out, added a power switch and generally tided things up a bit.

Unfortunately when I was setting OptimusPi up last night to take photos I suddenly noticed smoke escaping from the inside of the box... Possibly the mythical magical smoke that makes electronics work?

Quickly cutting the power (yay for the new power switch) I popped the lid off and removed the battery to check for damage. An initial glance didn't show any burnt wiring or other damage, which implies the damage was done to the Arduino which is hidden beneath the motor driver.

I've checked the Raspberry Pi and the OLED, which both seem to be working happily, but it was getting late and I didn't have time to check the state of the Arduino, so that's something I'll have to do tonight.  Hopefully its just the Arduino that got charred, and not the motor driver, as I have a spare Arduino I can replace it with (Although not a nice, shiny, black Adafruit one). But with only 11 days to go until PiWars I have a lot of work to do.

But back to the updated robot. With the motors mounted to the base I, technically, don't need the plywood base I was using previously, however it means the robot doesn't look all that pretty. I did have plans for the top, but now I'm not sure I'll have time to get anything extra done now. 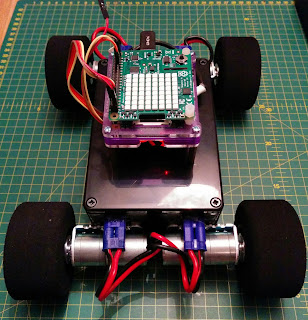 One other problem I ran into is I managed to end up with motors that aren't mounted level, so it has a bit of a wobble to it. Its something that's fixable (just takes more time) but I need a working robot first, here's hoping nothing too badly damaged.