In my last blog post I listed a number of items I wanted to complete over the weekend and, well a few issues cropped up that took up a chunk of time. My Sense HAT suddenly decided it didn't like my OLED display, both worked fine when connected by themselves to the RPi, but when both were connected the I2C bus starting reporting nonsense. Luckily I have a spare which doesn't have that problem, although I've ordered another OLED just in case that suddenly needs replacing too!

Most of my attention was spent on getting the line follower sensor re-mounted on the robot, as I no longer have the plywood base to connect it to. So for this I needed to create a new mount to hold it in place. Those of you who follow my Google+ account will be aware that I purchased a second hand 3D printer and its now time to create custom parts from nothing (well some filament).


Now a 3D printer is a long way from a Star Trek Replicator, for a start its not voice controlled, designing new components is a bit more complicated than pressing a few buttons, and its far from instant to actually create your new component. They also require a bit more maintenance as well, Sunday morning the PLA decided it didn't want to stick to the base, and Monday evening the gear that feeds in the filament decided to unscrew itself. Luckily each issue only took and hour or so to get sorted (Once Pi Wars is complete I'll be spending more time getting the 3D printer setup, including printing out some spare parts for itself!).

I've been using AutoDesk Fusion 360 to design my components (Its free for hobbyists) and after a bit of practice I can put together a basic (i.e. rectangular) shape in a few minutes. Once the shape is complete I use the '3D print' option to export a .stl file, which I then import into another program to 'Slice' it into 'GCode' ready to be fed into the printer (I'm currently using the RepRapPro Slicer software). Its recommended that the resulting G-Code is copied onto the SD card built into the printer for maximum reliability, which is another step to complete. (Once I have more free time I'm sure I can streamline this a little). 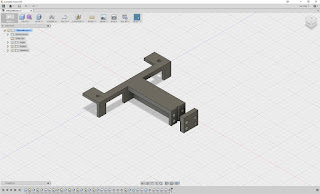 To actually control the 3D printer I have a Raspberry Pi connected to it via USB which is setup running VNC. Connecting to this via WiFi I can launch the control software, select the file from the printer's SD card and set it off printing. Depending on the size and complexity of the print this can take a few minutes, or a few hours, so I mostly alternated between printing the LineFollower mount and the 'wire' mount for PiNoon, tweaking the design of one whilst the other was printing.

The 'wire' mount took about three iterations, the first being too long, the second not strong enough, with the final one needing just a little bit of tweaking to match up the screw holes (for this I used a drill to widen the holes, as that was much quicker than printing off another component).

Well maybe not quite that simple, having items at different heights that 'float' in the air doesn't work unless its supported. Luckily the RepRapPro Slicer software will automatically insert supports to the model, but it can be a little tricky to trim it off afterwards. My first attempt has the screw mounts on the outside of the sensor, but this turned out to make the sensor a little too wide to easily connect to the robot. 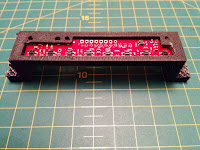 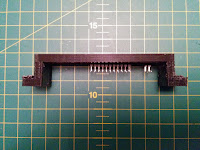 On the second attempt I flipped them over to be above the sensor, making it much more compact, but requiring careful trimming to remove the 'support' material.


Due to some of the issues mentioned above with the 3D printer the line follower didn't finish until late last night, so I've not had a chance to connect it to the robot yet and, due to it being work's Christmas party tonight it won't get done until tomorrow. However whilst it was printing I did move the Arduino onto a Perma-Proto PCB ready to be connect up (I may just use blu-tac for this, my robot has a lot of screw holes in it already!)

So with less than four days left to do things are sorta coming together, with a bit of a question mark around the Skittles challenge!