Moving on out - Driving the motors

With the basic chassis complete-ish the next task was to get it moving around so I can see if it actually works. The first step was to wire up the motors themselves, and for this I used a 15A rated figure 8 cable. Whilst this is overkill for the motors themselves (they have a 6.5A stall current) I would be connecting two motors on each side of the motor driver board, and its easier to use the same cable throughout instead of mixing and matching. As the back of the motors get a little close together I used a couple of pieces of heat shrink wrapping to cover the contacts to prevent shorts. 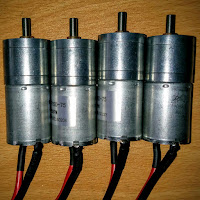 As this was only a test, instead of the final design, I left the leads quite long on the motors so I could cut them to fit later on. This should be easier than trying to remove the wires and solder on new ones in the future!
Having gotten rid of the large all-terrain tyres I was able extend the length of the pipes I was using to hold the motors, drilling a hole in the middle for the cables to come out of. To ensure the motors fitted better this time around I wrapped a strip of rubber around each one. This, combined with putting 4 notches in the end of the pipe instead of 2, gave a much firmer fit once the clamps were tightened. 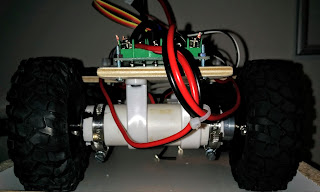 For this test I laid the rest of the components out in a line. The motor driver on the front, Raspberry Pi in the middle and the battery on the end. The motor driver was one I got last year off ebay and, whilst a little large, is the only one I currently have that is rated for the motors. The battery and UBEC I'm re-using from one of my BigTraks.
Using a couple of terminal blocks, and several cable ties, I was able to wire everything up. I did start looking at installing software and a python script on the Raspberry Pi to do some basic controls, but ended up connecting the motor driver directly to the 5V power rail, which should in theory cause it to drive forwards and full speed. 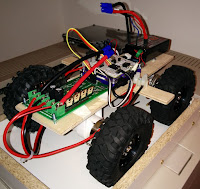 With everything connected up, and checked several times, I powered up the Raspberry Pi and (after making sure the wheels weren't touching the ground) connected up  the motor driver board. At this point the left hand set of motors burst into life, but the right hand side didn't move. I'd already checked that all four motors worked before installing them, so I knew it wasn't that, so I spent a bit of time checking connections but was unable to spot any issues, meaning its probable the motor driver at fault.

As it was getting late I decided to leave things as they were for now and see how things looked driving around. I was happy to see that the motors were being held in place and the pipe itself didn't end up turning. With the unbalanced power (only the left motors working) the pipes themselves did get pushed to one side, but I was pretty much expecting that to happen. A holding screw would deal with that, but there seemed little pointing adding it to this prototype.

So overall it was a successful run, with several known limitations. I've got a slightly more compact (and powerful) motor driver turning up this week, and once that's here I can start thinking about the software side of things.
As for the hardware, I still need to work out the best way of setting things up as there needs to be a clear space at the front for adding sensors and other challenge related components. My initial scribblings have the Raspberry Pi being raised and the battery installed underneath it.  I'm also considering mounting the motor driver and battery underneath, but I need to ensure I have sufficient ground clearance for the obstacle course... So still plenty of things to try out and test before finalizing the chassis design.