The parts have arrived for the primary motor controller. I've gone with a 'Monster Moto Shield' (which has dual VNH2SP30 chips on it) and, for ease of integration, an AdaFruit Metro Arduino board to plug it into.This board allows a current draw of upto 30A which, in theory, is way more than I actually need. Although as I'm pretty certain I burnt out a motor board last year when the wheels locked up I'm happy to have the extra over head. 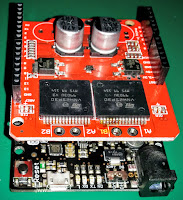 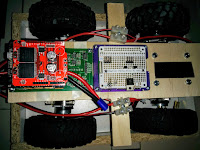 Ideally I'd have preferred a self contained motor board that supported i2c, but struggled to find one that could handle the high current required. The PicoBorg reverse (Which I already have) is rated a little too low for safety (5A when the motors stall at 6.5A) and the Diablo board would be overkill (and is out of stock). Hopefully this Arduino board won't keep locking up in the i2c code like the one I used last year did, which left  my robot driving around in a circle in the middle of the obstacle course challenge until the hardware watchdog kicked in!

Next steps will be mounting the new motor driver and then starting on the software.